First off-- Happy Veteran's Day everyone! I'm so thankful we have a day to honor our troops, and their families.

I cannot explain to you how excited I am to finally share this with ya'll. I have a new sewing table!!!

I've been sewing off and on for years, but it only really became a weekly thing with me after my kids were born. I never thought I really sewed enough to justify getting a table. But, I'm short and sewing for long periods of time on the dining room table just was murder on my wrists and back.

I knew that I needed either a shorter table or one that had a recess for my machine, but these were really expensive in the store. But then I came across this tutorial, and after thinking about it for a long while, I decided to try to DIY my own. (Or, more accurately, I convinced my husband to help me DIY my own). 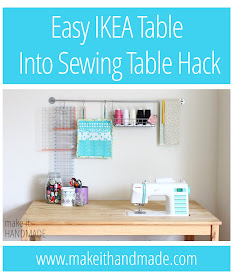 This was our first woodworking project, so I didn't want to spend a lot. I scoured craigslist for a few weeks, and lucked out and found the Ingo Table for just $10.

We also had never, ever done any sort of woodworking before, so we had to buy all the tools (except for a drill). I spent a few months searching, and these were the cheapest tools that had good reviews. They worked perfectly for this project. (These are affiliate links, so using them to purchase helps support Make It Handmade!)

All the tools, paint (I still need to paint!), wood, screws and bolts added up to $138 dollars. Way cheaper than the average sewing tables you can find online, and this one fits my machine perfectly!

I used the same table (the IKEA Ingo) as used in both the Blue Dinosaur and From Marta Tutorials, but we still ended up hitting a few snags.

We measured everything out according to the tutorial, and traced out the machine. I was too nervous to do the jig sawing, but my husband nailed it! 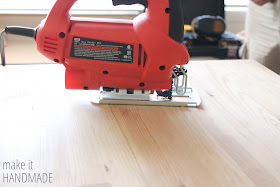 We used a drill to create the hole to put the blade through, and then just followed the line. 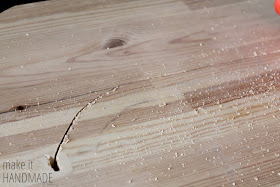 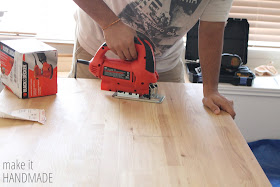 The hole looked pretty scary after the jigsaw, but I was so impressed with the way the orbital sander smoothed everything out. 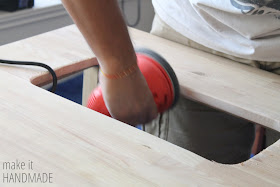 Now for the crummy part... see those metal brackets in the corner, and the screw for the tabletop? we didn't account for them when we measured and made our beautiful hole for the sewing machine. If we were doing it again, we'd move the table over a few more inches so the 2x2 was well clear of the hole. We would also cut that shelf a bit longer to give the machine more clearance. 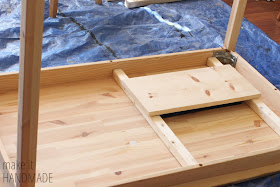 As it stands right now, the 2x2's are just outside of the place where the machine sits.  Here's a view from the bottom. 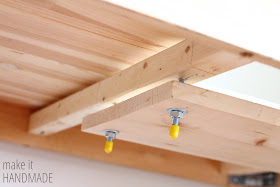 Because that 2x2 is so close to the side of the opening, we ended up having to cut another hole for the power cord. 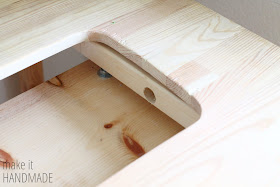 It took the better part of a weekend, but it was so, so, so worth it. If you are attempting this yourself, I strongly suggest flipping your table over, and measuring everything out taking into account the existing nuts and bolts before you get the jigsaw out. Other than that-- if we can do it, you can too. 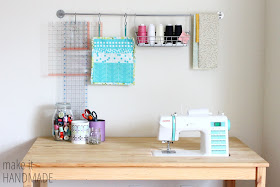 Oh-- and how does it drive? It's absolutely heavenly. I wish I had done this years ago. My machine is so comfortable to use now. As a bonus, it's so much quieter then when I had it set on the table top. The first few times I sewed, it felt strange not to hunch over and scrunch up my shoulders-- but I don't think I could go back to sewing any other way. I do hope you all try it-- and if you do, tell us all about it in the comments!
Palak at 7:30 AM

Leave a comment, I'd love to hear from you!

There is no word verification or log in required. Comments older than 30 days are moderated. I'll get back to you as soon as I can!